Comparison of AWS vs Azure vs Google Cloud

The popularity of cloud storage platforms has grown like crazy in recent years. And the services provided by the clouds have become extremely important for various companies of informational and technological orientations.

Is your company planning on moving all of its performance power unto one of these platforms? Wondering which cloud service is best for you? In this article, we will look at Top 3 cloud services used by millions of people, compare their calculational and analytical capabilities, as well as price forming and networks, and decide on the best one in the battle of AWS vs Azure vs Google Cloud.

What is a cloud platform exactly?

The cloud platform is a set of serves and powers provided by the developers. They offer users access to computational resources and analytical tools, as well as data storage space, servers, software, and other things for casual users and big companies.

Before comparing the current leaders on the market of cloud providers, let’s take a look at each one and see what they are all about:

Let’s check out the technologies used by our leaders for keeping data on their platforms safe and sound.

The hybrid approach is one of the latest fast-growing tendencies in the world of cloud platforms.

Microsoft has been long recognized as the best option if you are going with this method among our AWS vs Google Cloud vs Microsoft Azure competitors thanks to its Azure Stack software solution. The platform provides its clients with the ability to host Azure cloud services on a local data processing services with an open control portal, code, and API-interfaces for the purpose of simple integration and compatibility.

Computational power is the baselining of any IT-related business. The main advantage of cloud platforms is that they provide effective instruments for all sorts of calculations with the ability of remote control, as well as scaling independently of time and physical location.

AWS and Microsoft Azure are the most popular cloud platforms in the top three. Their computing power is similar, and the list of services is regularly expanded. Here we’d like to advise reading more on ensuring cloud scalability.

All the platforms also provide access to some effective analytical tools.

Load balancing services are available in GCP and Azure. They distribute traffic to improve fault tolerance:

Layer 7 load balancing is available from Azure and Google, which means that client requests at the application level can withstand more complex routing than the previous Layer 4c

Among the Google Cloud platform vs Amazon Web Services vs Microsoft Azure, level 4 balancing is available with Azure and Google platforms. It distributes client requests equally around a region through the network routes.

Microsoft and Google are known for their high level of security when it comes to cloud information storage. Both providers have constructed a model based on more than a decade of development history.

This high-security level is achieved in three ways:

Besides that, Google and Azure conduct their security policy in a way that meets the requirements of CSA STAR, GDPR, HIPPA, PCI-DSS, and the standards of ISO.

The level of security Azure has today is the highest among the three cloud platforms we have on our list. It complies with more than 90 quality benchmarks in 50 world regions. For reference, Google’s compliance matches just 45 of them.

The three cloud platforms have different approaches to pricing in using their services.

AWS has three options for making a payment:

Amazon Web Services’ paychecks are rounded by each hour of use.

Microsoft Azure has a different scheme of price forming. Vendor resources are billed with rounding up for each minute. Discounts are available based on the volume of services used.

GCP works on quite the same principles as Azure but with an exception of the end paycheck being rounded every 10 minutes of use.

The platforms have built special calculating services for fee analysis to make things easier. You can access the AWS’s by following this link. Here is Microsoft's pricing calculator. And here is the one by Google.

All the platforms also have trial versions you can try out for free:

AWS vs Azure vs Google Cloud Pros and Cons

Although AWS seems to be leading by many aspects in the battle of google cloud vs azure vs AWS, Azure and Google Cloud also have something to bet on:

AWS has outpaced its competitors by creating a set of cloud services as early as the year 2006. AWS has a broad and growing range of offerings as well as the most extensive network of global data centers among the others. The provider is constantly strengthening the level of security and reliability of the platform. AWS's partner ecosystem and overall product strategy are considered to be the market leader, a wide variety of third-party software services are available at AWS Marketplace. As Gartner noted in its report Magic Quadrant for Cloud Infrastructure as a Service, Worldwide:

One of the shortcomings of AWS is the extent of its offer. Although the availability of a large number of resources is rather an advantage, it can be difficult for users to navigate through the numerous functions available.

Besides, in the trinity Google Cloud vs Amazon Cloud vs Azure, AWS has the highest cost of use. Despite the fact that the platform regularly cuts its prices and offers discounts, it can sometimes be tough for companies to calculate costs and effectively manage expenses when using a lot of different tool resources.

According to the survey of 100 IT executives conducted by Goldman Sachs in January 2020, 56 of them said they preferred Azure to Amazon Web Services cloud platform.

Microsoft is also increasingly adopting open source technology. Today, at least half of the company's workloads are run on Linux.

One of the drawbacks of this cloud service is a series of failures, including a major resource shutdown in May 2019. If we analyze the history of Google Cloud or AWS or Azure, AWS is also not immune to disruptions, but its last major blackout happened in 2017 when cloud technologies were a little younger, while Google Cloud service experienced its last major malfunction in November 2019.

Many organizations are also dissatisfied with the quality of Microsoft technical support, so that's something to consider.

Repeatedly deploy the infrastructure during the development cycle with Azure. Azure resource manager templates allow you to deploy templates multiple times with constant project state. This way, you don't need to generate them separately for each individual update. Resource Manager also runs a series of Azure deployment templates simultaneously, using a single command.

Though users are not happy with the errors in the processes related to corporate accounts. Sometimes it hinders conducting transactions. Some of the shortcomings come into play in areas such as contract negotiation, Independent Software Vendor Licensing (ISV), integration with enterprise systems, and client support.

It is also important to note that Google has the lowest presence among Google Cloud Platform vs AWS vs Azure, and is also absent from one of the world's largest markets — China. By contrast, AWS and Azure are represented in mainland China — Beijing Sinnet Technology, NWDC, and 21Vianet.

The choice of cloud service provider depends on the needs and workloads of your specific business — medium or large. The table below lists the services of the leaders in cloud computing.

External applications can be run on all three platforms. For example, Google has partnerships with SAP, Pivotal, and Rackspace. 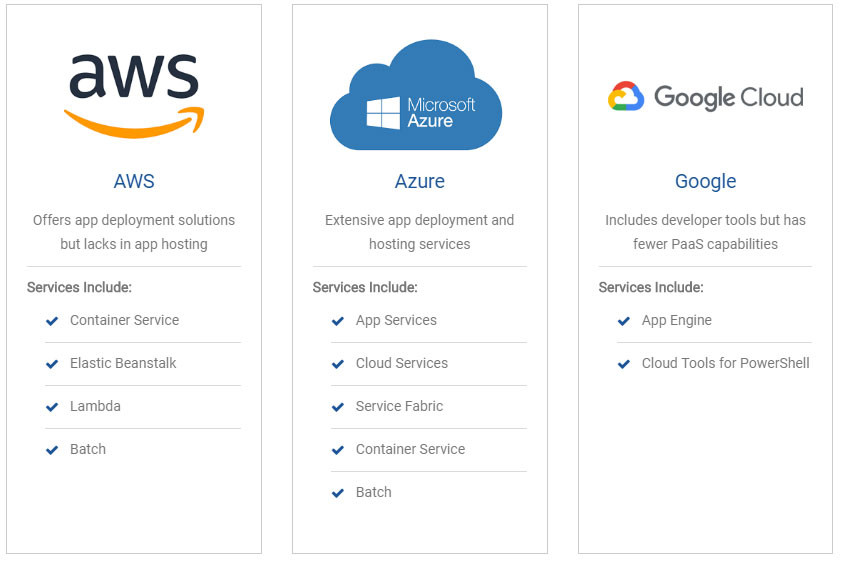 The table below lists some of the key differences between the leaders:

The optimal cloud service provider should be selected considering your specific needs and the workload of your company. After examining and comparing their features in this article, we suggest that you try a free trial version of each one and decide on the most suitable platform for you.

Need experts help? Contact us to get professional consultation on your challenge.